Marathons are long (26.2 miles), they’re hard and they take a lot of training and hard work. Yet not all marathons are created equal. Some are extremely popular while others… not so much. Here is our list of the top 10 most popular marathons in the United States. 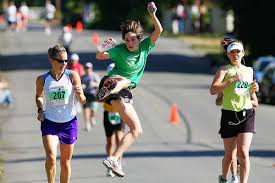 #1 – New York always has to be the biggest, doesn’t it? So it should be no surprise that the ING New York City Marathon should come in at number one. Last year 43,660 people finished the New York City marathon. It’s not easy to get an entry but if you do this marathon includes running through all five boroughs. You start in Staten Island, cross bridges, pass excited crowds and end in Central Park, by the world famous Tavern on the Green.

#2 – The Bank of America Chicago Marathon slides in at number two. Runners love this marathon because it’s flat. In this case, flat equals fast. It’s a great beginner marathon, or a good time improver. The best part about this course is the wonderful tour of Chicago, you run through diverse neighborhoods and past tons of landmarks. For a runner, there is no better way to see a city. Last year Chicago had 33,701 finishers.

#3 – The Boston Marathon may be the most well-known marathon, but it’s hard to qualify and hard to finish. Last marathon saw 22, 843 finishers. The race takes you past colleges, universities, and some of Boston’s nicer neighborhoods.

#4 – Washington D.C.’s Marine Corps Marathon doesn’t have that large a finishing purse so it’s a good first marathon (you might not be competing with some of the more hardcore marathoners). Plus, you get a beautiful run through D.C. Finishers: 21,405

#5 – Honolulu Marathon is in Honolulu, Hawaii. For this reason alone, we’re surprised it’s not number one. Finishers: 20,323

#6 – The Walt Disney World Marathon in Orlando, Florida is a great way to see Walt Disney world and its characters without having to wait in any lines. The best part? You can always stay for the rides. Finishers: 14, 948

#7 – If you’re going to run the Los Angeles Marathon just pretend you’re running away from the paparazzi or that you’re running after a Hollywood celebrity. Plus, the weather is usually fantastic. Finishers: 14,125

#8 – Rock ‘n’ Roll San Diego Marathon. Not only do you get to run through San Diego, you get a free Sea World ticket! It’s scenic, coastal and there are over 40 stages playing live music to help you on your way. By the way, this is only one of many rock and roll marathons. Finishers: 13,391

#9 –  The Medtronic Twin Cities Marathon has been called the “Most Beautiful Urban Marathon in America.” So, obviously, it’s pretty. Finishers: 8474

Thirty year old, Stephen Muange from Las Cruces, New Mexico took first place for the men with a time of 2:15:16. While thirty-four year old, Olena Shurkhno, from New York, New York, came in first for the women, with an event record breaking time of 2:29:11.
Here are all of the results: http://results.active.com/pages/searchform.jsp?rsID=118719
This was Kenyan Muage’s first marathon. It was Olena Shurkhno’s second time winning the Baltimore Marathon.

Approximately 25,000 runners participated this year, the largest turnout to date, about 14% more than last year. They ran through the zoo, past Under Armour and through the city. It’s estimated that the Baltimore marathon pumped $30 million into the economy. That might sound like a lot for a race, but consider that last year’s event had a $28 million impact—with less people. Forty percent of the runners were from out of town, that’s hotels, restaurants and, possibly, shopping or museums that benefit.

Did you run the Baltimore marathon? Did you watch it? How did this year’s marathon compare to others?