If you missed some of this year’s big running events, you still have a chance to make up for it. Here are the remaining fall marathons for 2011: 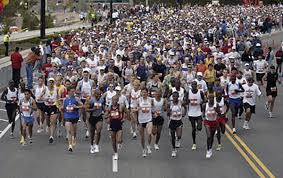 October
Run for Your Life
October 22, 2011
Baltimore, MD
This is only a 5k race but it promises to be a lot of fun. According to the website, “It’s a zombie-infested 5k obstacle race.” Enough said.

ING New York City Marathon
November 6, 2011
New York, NY
This is the largest marathon in the country. You run through all five boroughs of New York City while being cheered on by thousands of spectators.

SunTrust Richmond Marathon
November 12, 2011
Richmond, VA
Runners enjoy the small-town feel of this marathon (even though Richmond is actually a city and not a small town).

When choosing tennis racquets, you need to consider your personal style of play. Both of the racquets have the Cortex system that lessens the shock of the ball during play. I cannot feel vibrations in my racquet handle with this added feature.

They both also have the GT technology that uses graphite and tungsten for a more stable feel when playing. I am a baseline player so I feel that I play better with the Babolat AeroPro Drive GT tennis racquet. I need more power and spin from the racquet, as I have not perfected my continental grip yet. I think the name includes Aero because of the aerodynamic science involved in producing it. It gives me the boost that helps me win games.

Of the other Babolat tennis racquets on the market, I have tried the Babolat Pure Drive GT racquet. This racquet seems to help me with my serves and gives me just enough extra control and spin. I also noticed that I hit my volleys better with the help of the lightweight style of this racquet. My friends use these tennis racquets because they are experienced players that have perfected their spin and are more forceful on their own. The Pure Drive GT is a more precise racquet.

I play tennis because it is a lifelong sport and so much fun. A small investment for proper shoes and a great racquet is all I needed to improve. Well, to be honest, hours of practice doesn’t hurt. Other brands of tennis racquets are on the market, but most of my experience has been with Babolat. A good retailer will allow you to test drive some of their racquets. This is the best way to tell what is right for you. Enjoy your matches!